Well we finally have a date, and some great footage to boot:


I'm sure you'll agree that the new lighting system looks fantastic. I'm so happy with how much it adds to the overall feeling of Grim Fandango. Additionally the new score really adds to the depth of the original. That said, there are some disappointments, too.

Tim Schafer has confirmed that the models themselves haven't been altered in any way (other than increased textures). This is a shame. The character's fingers still are comprised of "x"s instead of three dimensional shapes, and thing look very angular in places (especially Manny's head and Glottis).

There's also a few visual glitches in the videos (see below), but I hope that these are fixed before release.

On the whole, I cannot wait to play Grim Fandango Remastered. It looks (and sounds) AMAZING... but maybe Grim Fandango Deluxe isn't finished after all.
Posted by Johnny Walker at 04:21 1 comments

Out of the blue has come the most wonderful news. It appears that Tim Schafer and Double Fine will be involved in remastering Grim Fandango for the PS4 themselves!

This is completely unexpected and absolutely fantastic news! Provided they do as good as a job, or better than, the contributors have already done for Grim Fandango Deluxe! ;)

Seriously guys, don't mess this up! :)

Ever felt fed up with Grim Fandango's controls? Missed being able to play an adventure game with your mouse? Well one fan has taken it upon themselves to create an incredible mod for ResidualVM allowing you to do just that. 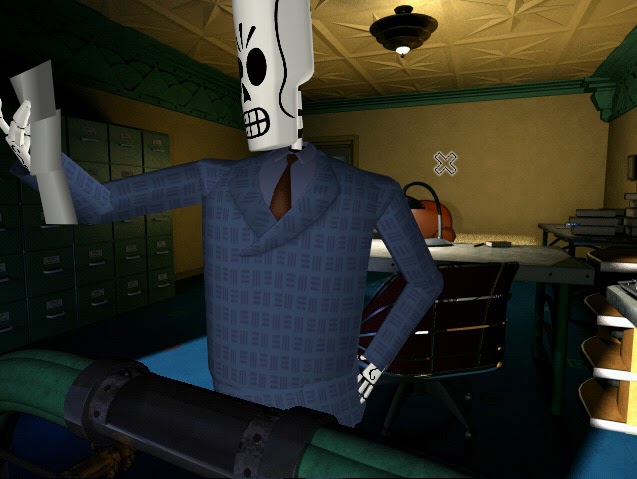 The mod's creator, a programmer named Tobias Pfaff from San Francisco, has single-handedly added a traditional point and click interface to the game. Even more exciting is that you can play this new version right now (provided you own the original, of course):

Get the mod here!

I have played with the new mod and can confirm that it works amazingly well.

Great work Tobias Pfaff! (Maybe you should consider a job at a certain SF-based game studio? ;)
Posted by Johnny Walker at 10:11 6 comments